In honor of all Halloween being right around the corner,
I wanted to share an couple of
"spider-rific"
activities that I taught my Preschool and Early Elementary
Homeschool Coop kiddos.

The activities are in a class called
"Mother Goose Math
(and a Fairy Tale or Two).

This particular week we learned
"The Itsy Bitsy Spider."

I opened the classes by letting the kiddos watch
part of THIS video on You Tube,
which sang
"The Itsy Bitsy Spider" song.

After my preschoolers watched the video clip... 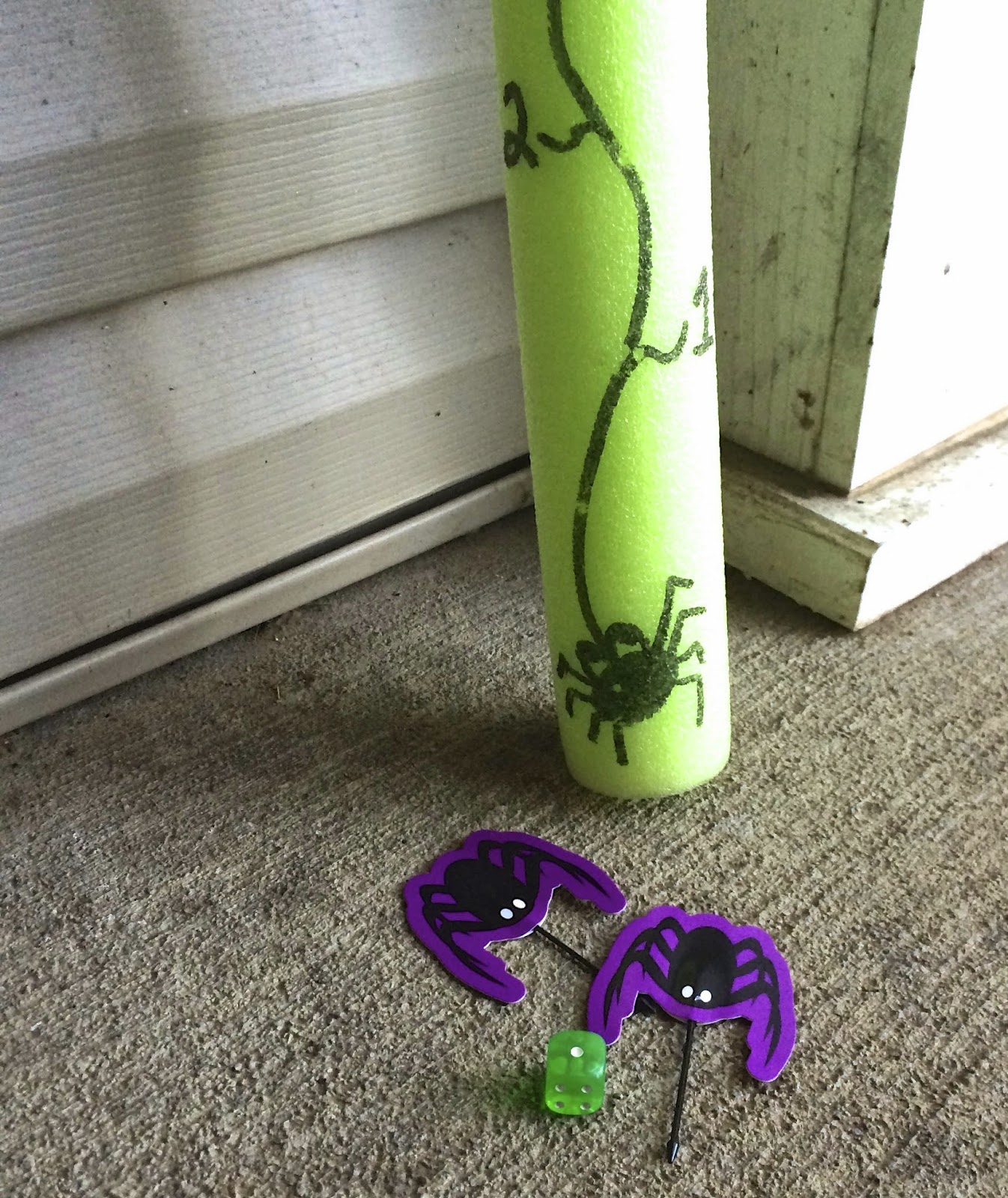 ...they played a game I like to call
"Up the Water Spout." 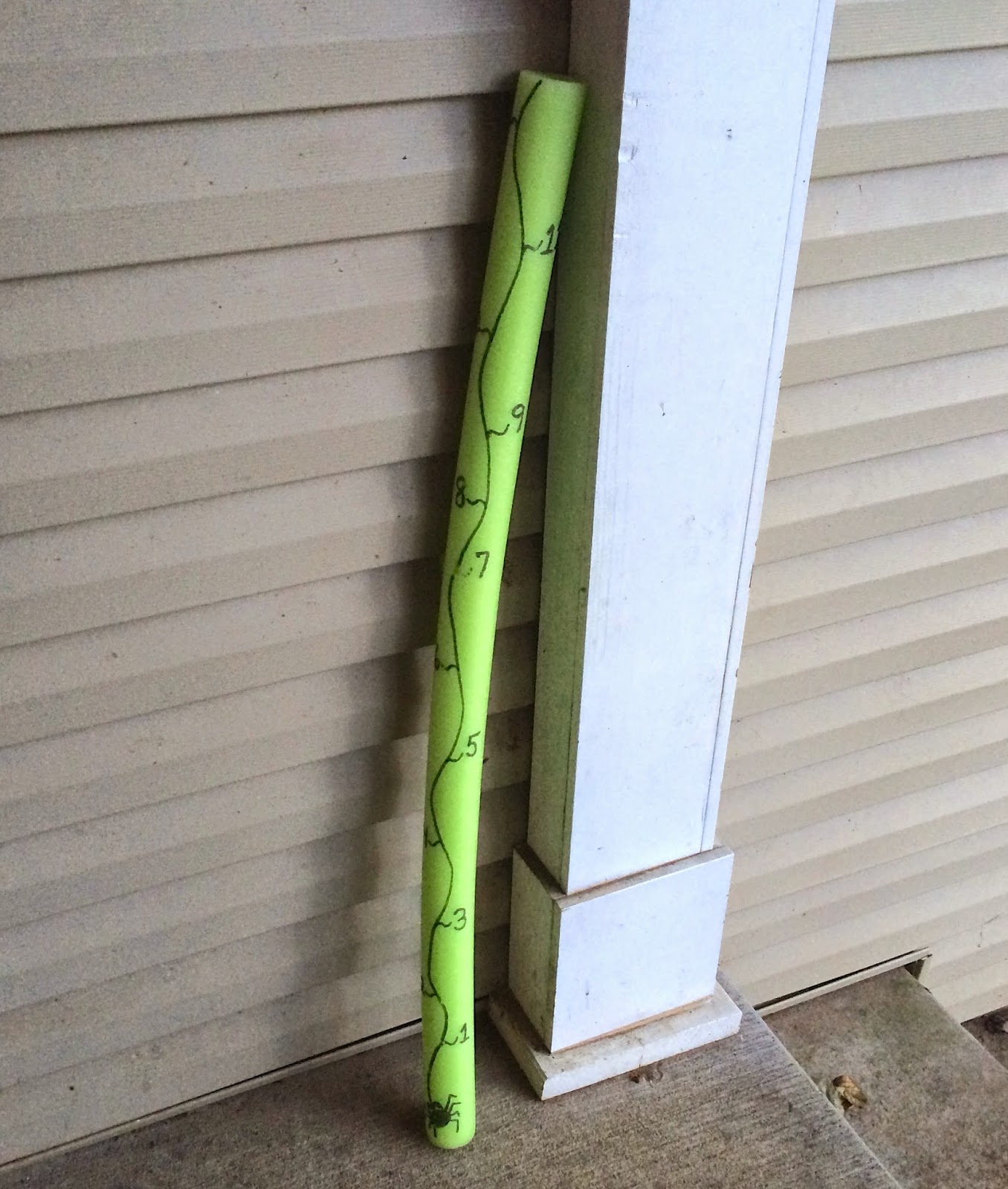 I took a pool noodle
(from The Dollar Tree)
and drew a long strand of spider silk
"down the water spout"
with a black permanent marker.

I then added a spider at the end,
and wrote the numbers 1-12
going up the spider silk.

To complete the game,
each child had his/her own spider on a pick
(also from The Dollar Tree)
an a die per every pair of children. 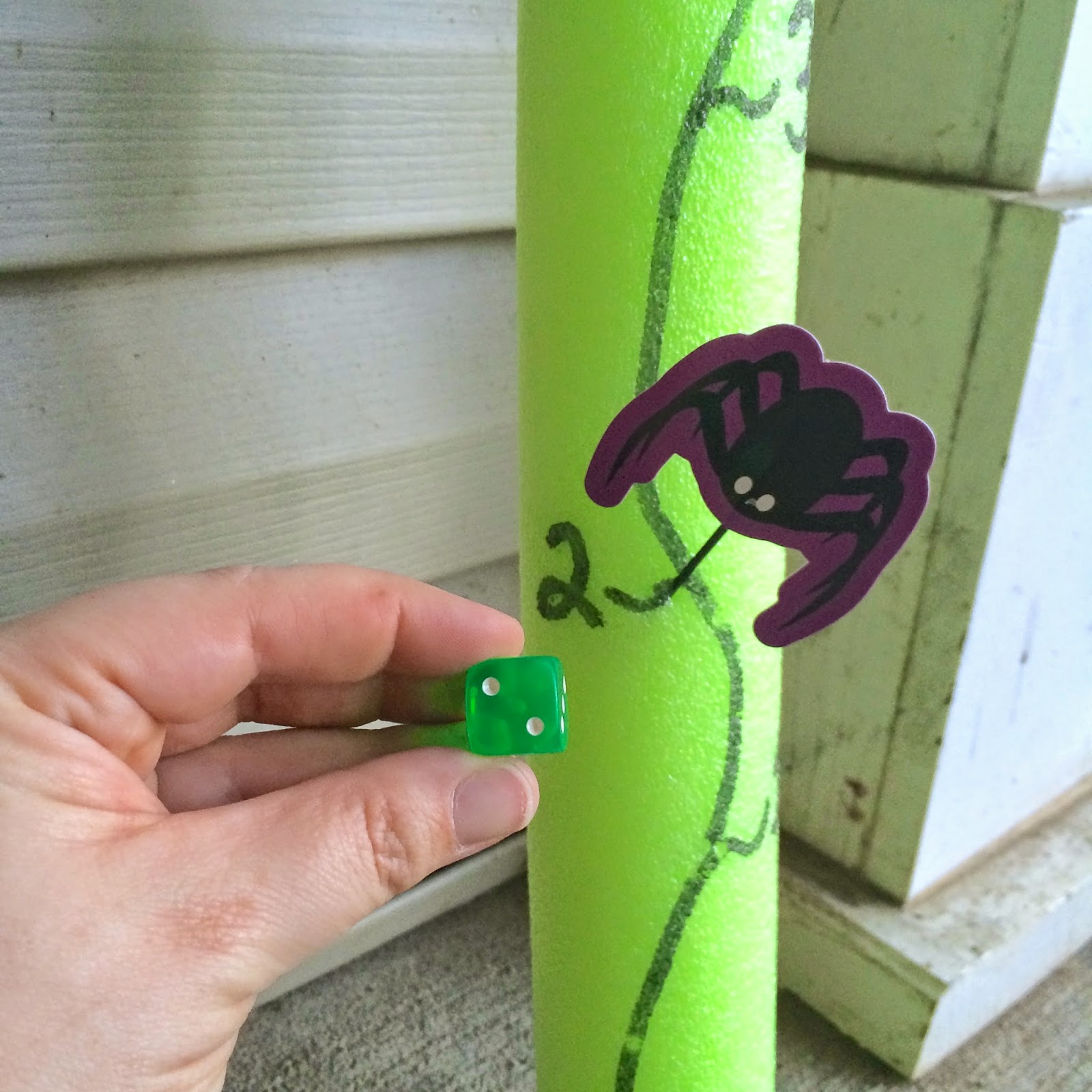 To play this counting/numeral recognition game,
the kiddos worked together in pairs
to get their spiders up the water spout
by rolling a die and moving their spider picks
accordingly.

This game worked really well for this age group-
and was SUPER simple to make!

After the kiddos played the game a couple of times,
I handed out spider baggies... 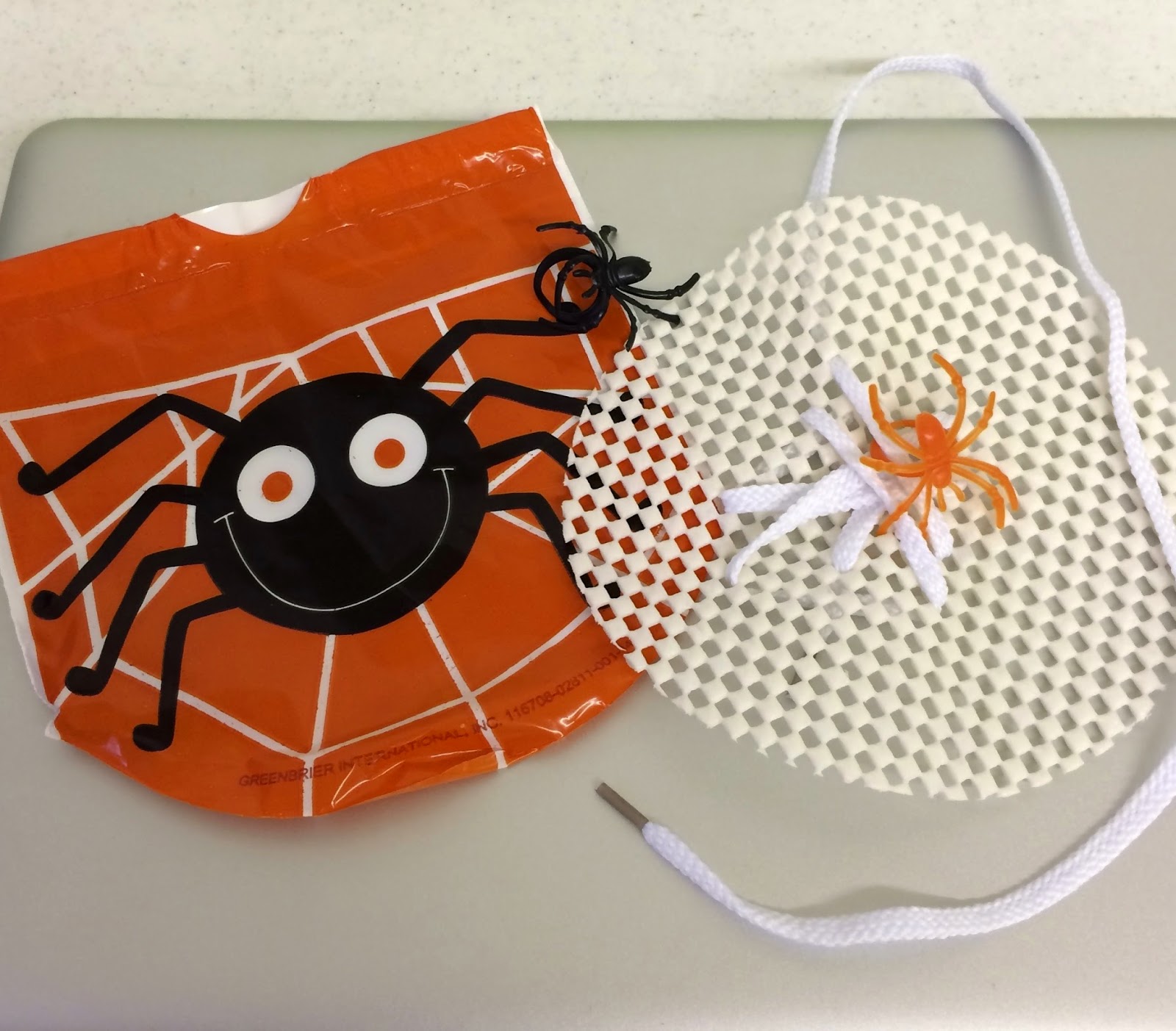 ...so the littles could practice using their fine motor skills
by making mini-sider webs.

Each baggie contained a couple of spider rings,
a shoe lace,
and a circle mesh grip.

ALL of these items-
(including the cute spider baggies)
were found at-
you guessed it-
The Dollar Tree! 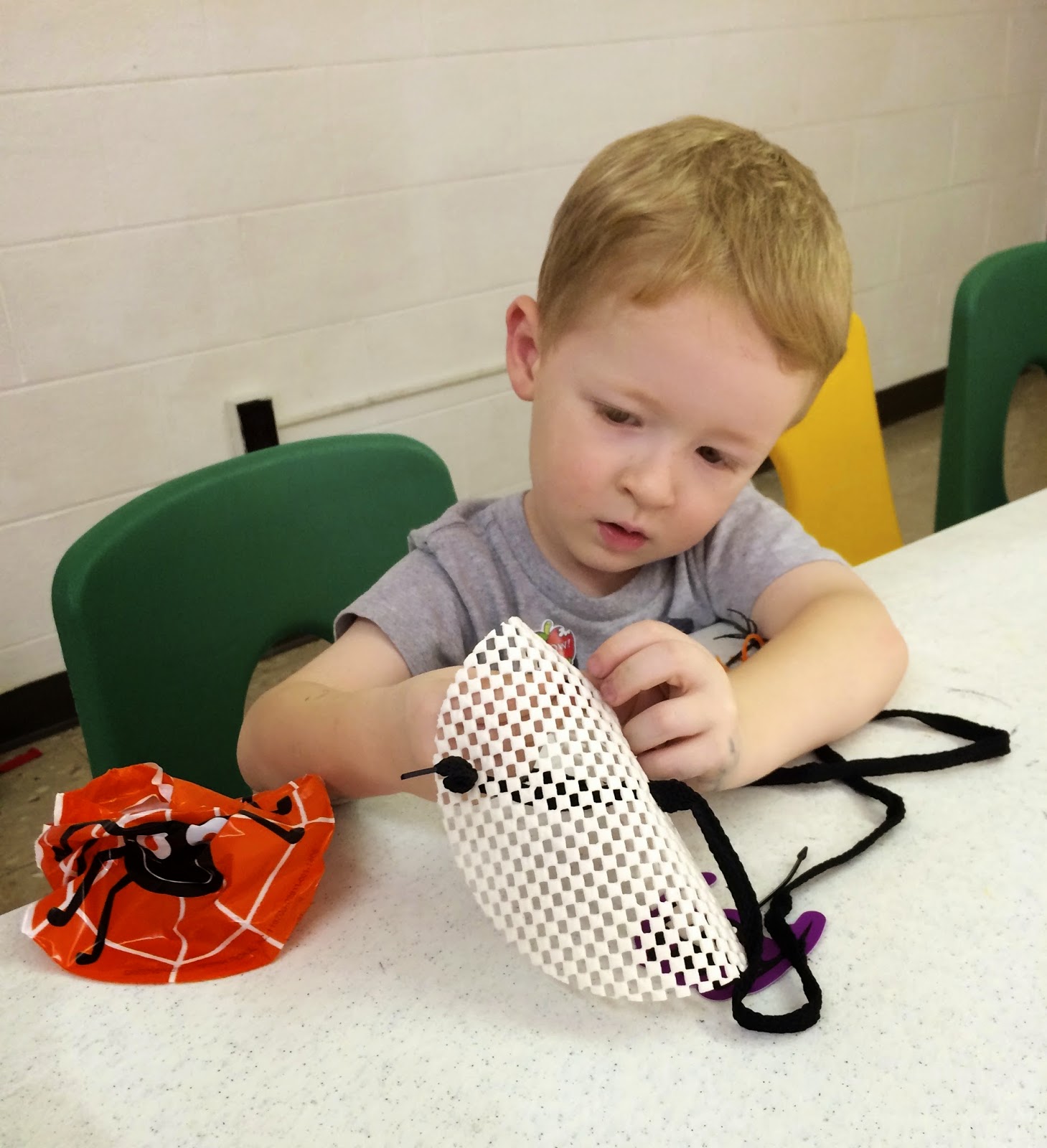 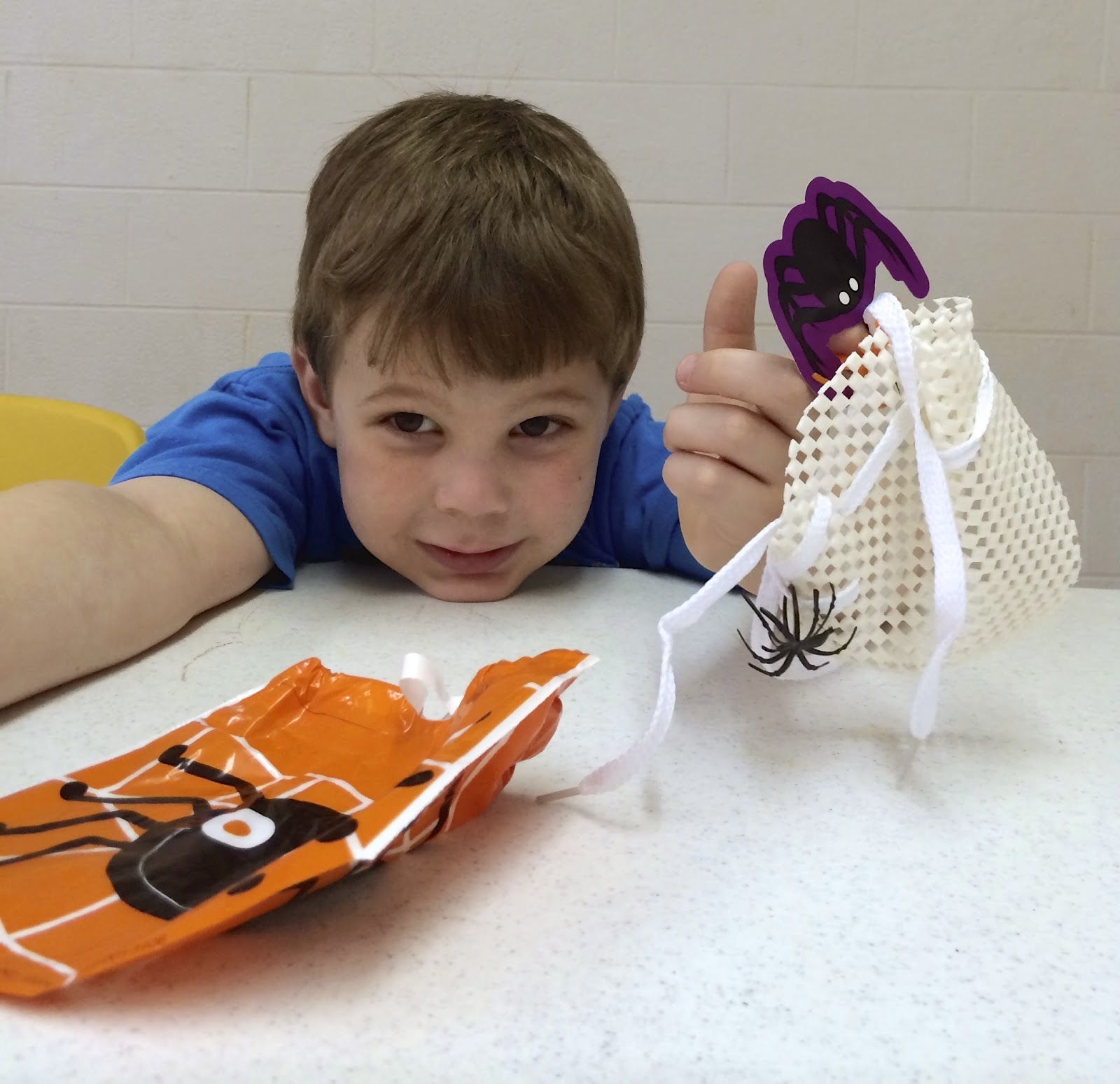 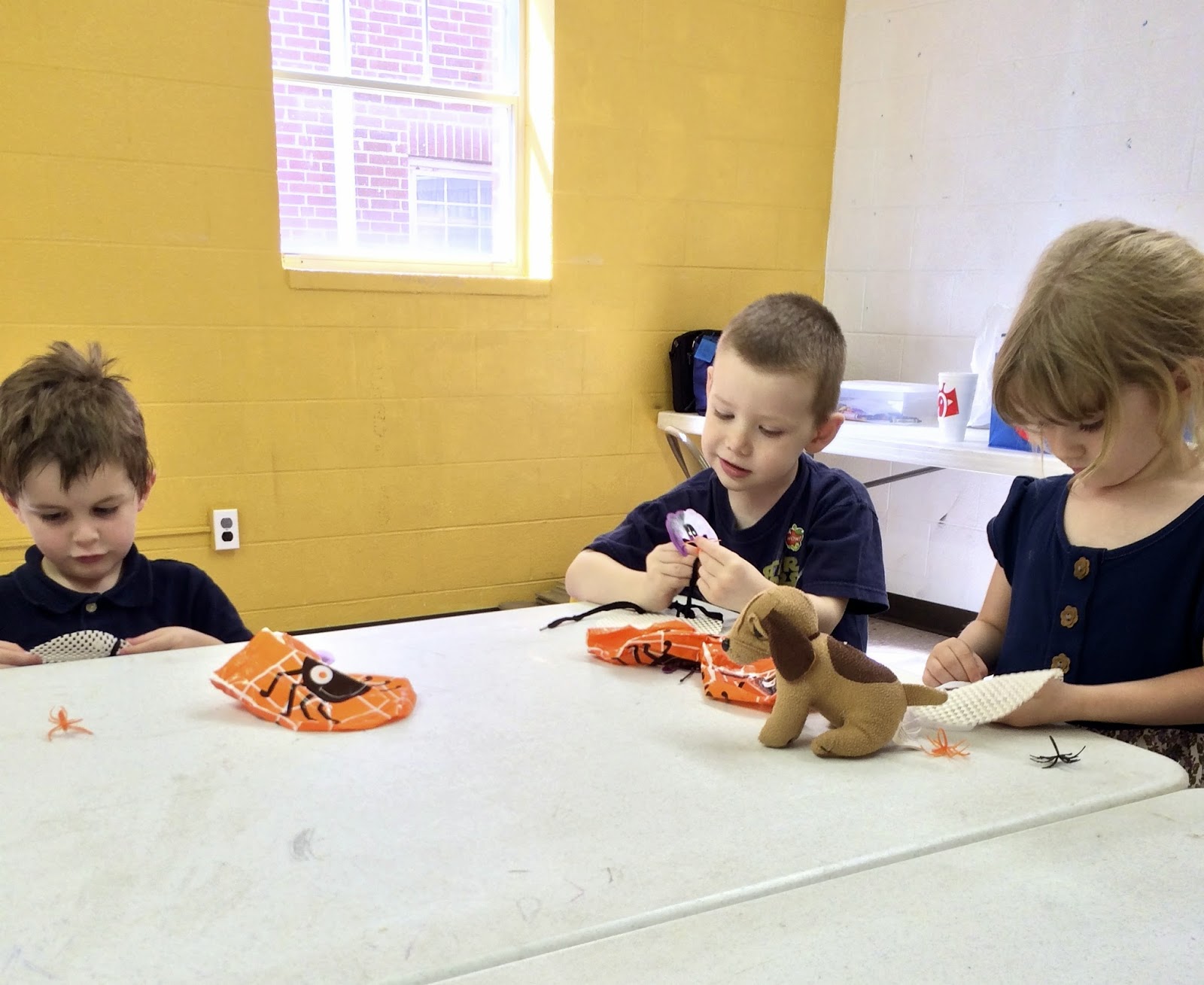 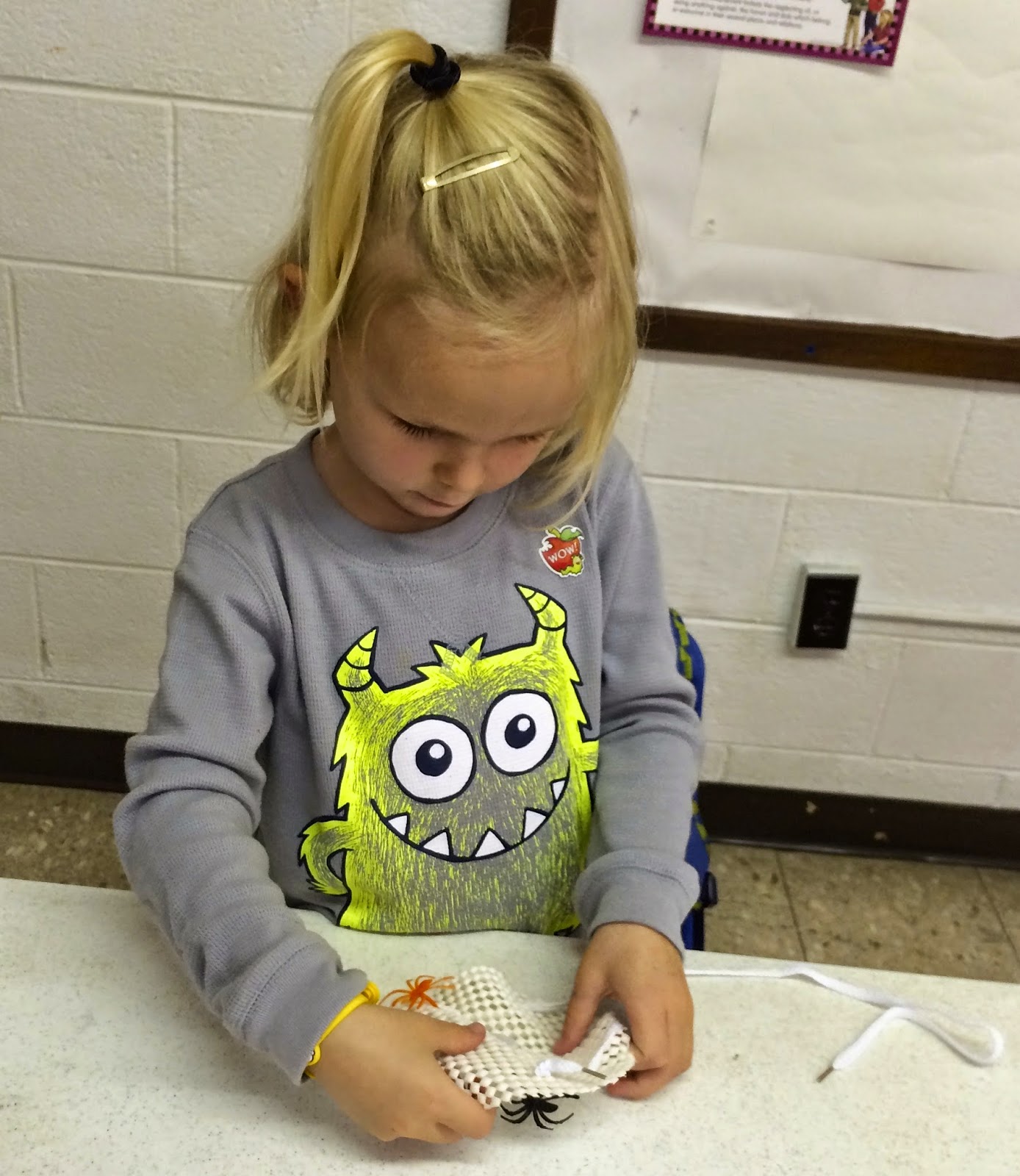 During my K-2nd grade class,
the kiddos focused on practicing
counting, adding, and subtracting using... 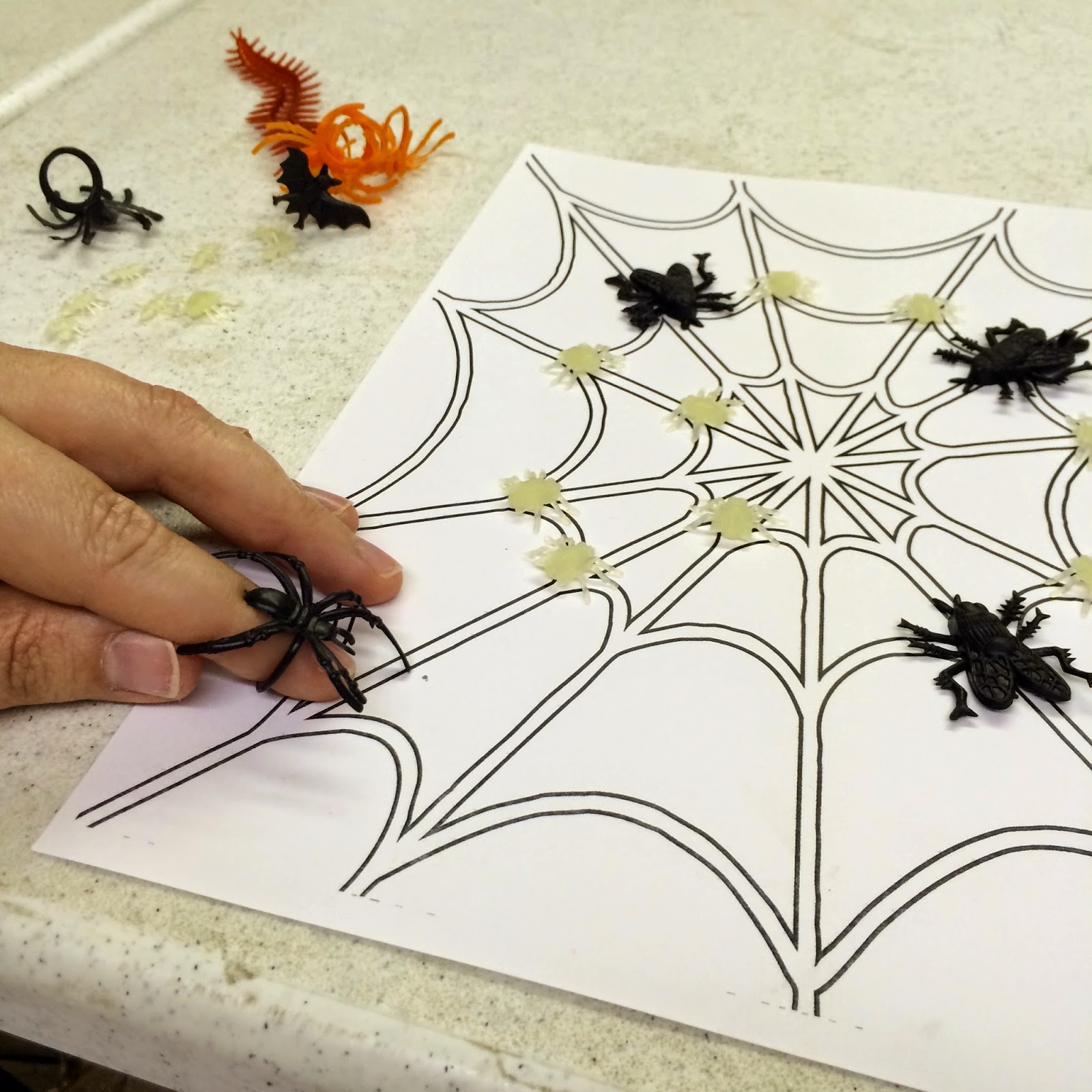 ...card stock spider webs and a baggie full of insects.

I got the word problems and spider web pattern
from THIS Spider Teaching Packet.

The insects were from The Dollar Tree,
and since what I found was not the same
critters listed in the word problems,
I changed the problems around a bit. 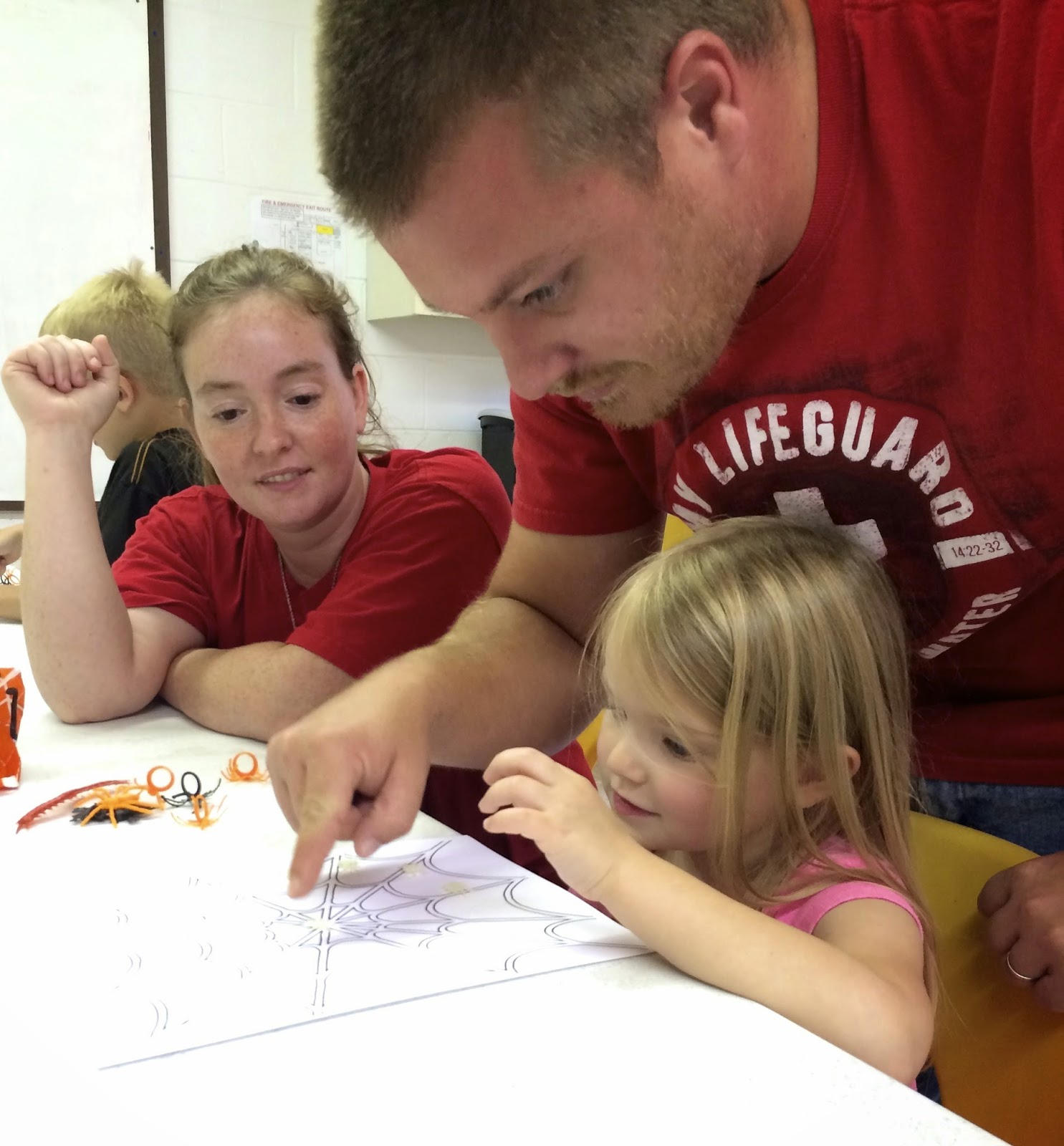 I would read the problem aloud-
most of which were about Itsy Bitsy
and the critters she caught in her web. 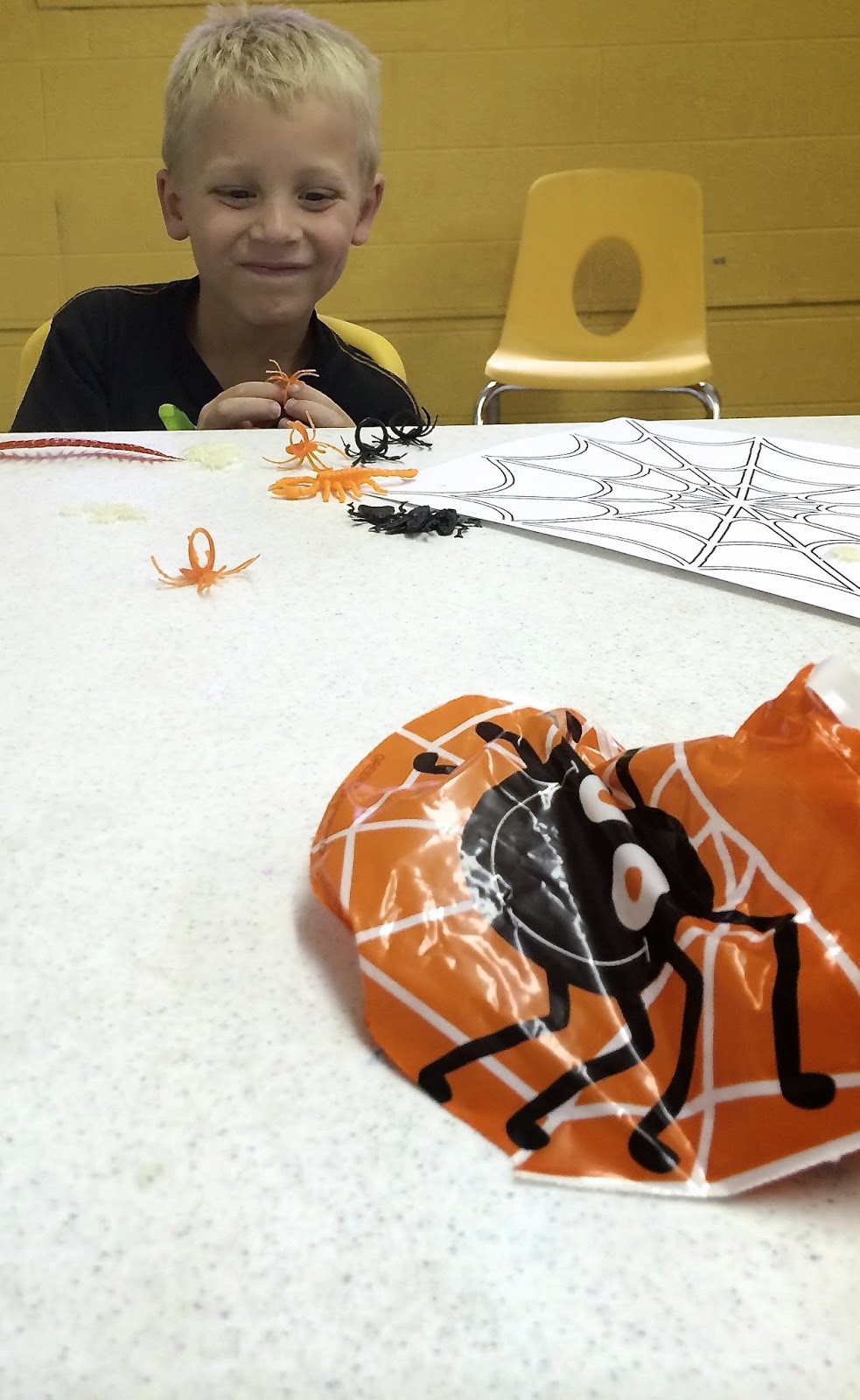 As we went throughout the problems together,
the kiddos laid out the insects
on their webs that the problem listed. 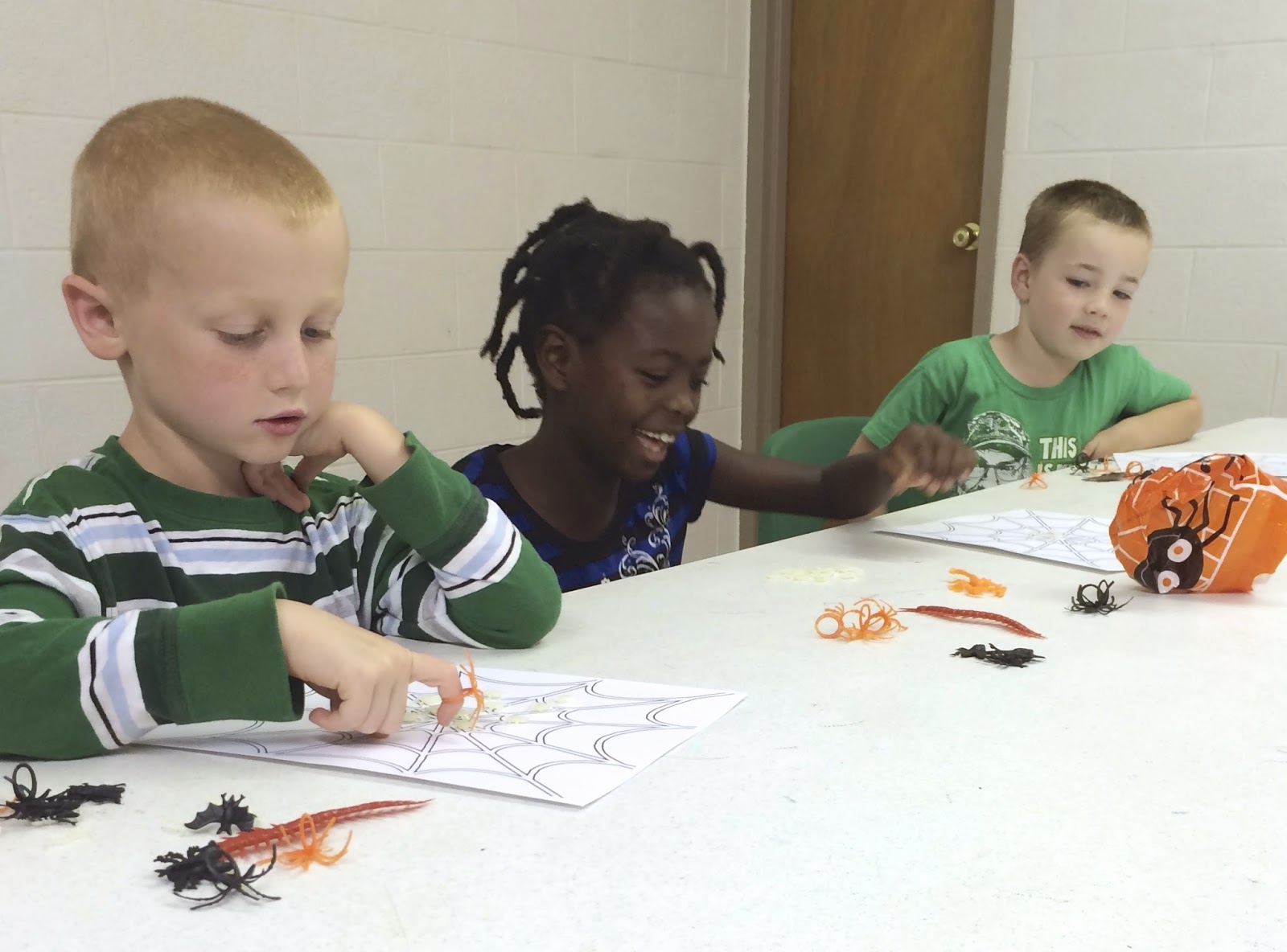 This was a GREAT way to practice word problems-
and make them FUN!

The kiddos enjoyed all of the creepy crawlies,
and I *think* the hands-on manipulatives
assisted them with understanding of the problems.

I think these activities prove
that almost anything can be used to learn.

Also-
before I finish up-
I wanted to leave you with a
bit of inspiration... 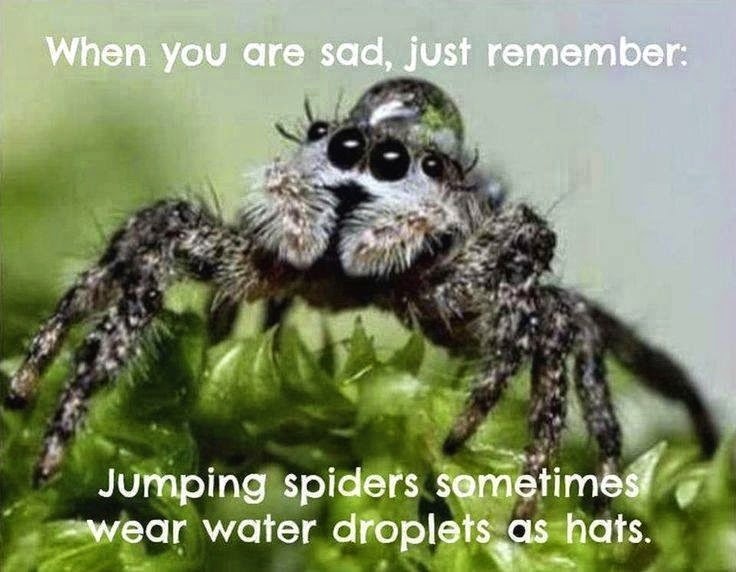 Linking up with
Kindergarten and Preschool Corner...
Posted by Unknown at 13:46